FORMATION, THE CATHOLIC PRIESTHOOD AND THE MODERN AGE 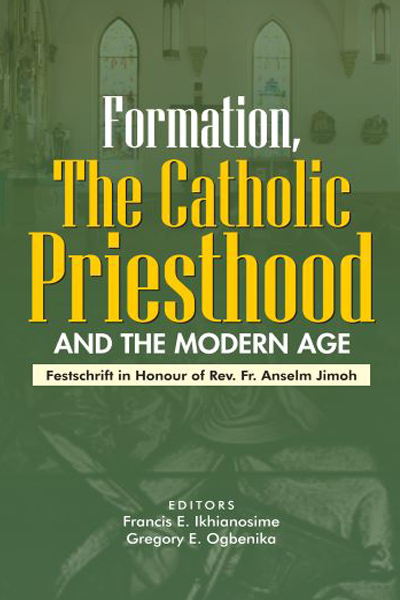 Formation, the Catholic Priesthood and the Modern Age: Festshrift in Honour of Rev. Fr. Anselm Jimoh on his 25th Priestly Anniversary

This idea of publishing a book was mooted to celebrate the 25th priestly anniversary of Rev. Fr. Anselm Jimoh, PhD and also to contribute to knowledge in a field the silver jubilarian has spent most of these years; which is formation. For the last 25 years, Fr. Anselm Jimoh has been around the corridors of formation; preparing and teaching young men who have made a choice to become priests. Fr. Anselm Jimoh is a profound academician with specialty in epistemology, particularly in African epistemology. His contributions in this field of academics have been so immense that he has risen to the academic rank of an Associate Professor of Philosophy. He has taught philosophy in three seminaries, namely, Seminary of All Saints, Ekpoma, St. Albert the Great Seminary, Abeokuta and Ss. Peter and Paul Major Seminary, Bodija- Ibadan where he is currently the Head of the Department of Philosophy. He has devoted time, interest and efforts in sharpening African epistemology, defining its parameters and theorizing largely about its nature. All these, he has done within the ambience of formation. His contributions are not just notable they are influential. Hence, with him reaching a milestone age in his priestly ministry, it became an auspicious time to have a book of reading in his honour as well as contribute to knowledge in the area of formation. Furthermore, since there are ubiquitous literature on formation, this volume has adopted an approach that would address extant challenges, while satisfying the primal motive for this publication; a robust book on formation in our modern age. Thus, a title which would satisfy these directions was adopted, namely:

FORMATION, THE CATHOLIC PRIESTHOOD AND THE MODERN AGE – Festschrift in Honour of Rev. Fr. Anselm Jimoh. Formation is indisputably a critical variable in the preparation and eventual ordination of priests. The Catholic Priesthood has been the spotlight of many conversations in recent times from the good to the ugly. Although the priest or priest-to be is called to be set apart, this is first a call from the people. As a man called from the people, he is not completely immune from the challenges of society. The formation then helps to shape, prepare and dispose of the priest-to-be to the gospel he is called to embrace. The Church invests richly in the formation of seminarians and priests because of this critical importance. The formation covers four essential aspects of the priest, namely, the Spiritual, Human, Social, Intellectual and Pastoral Life. Hence, it becomes expedient, to have a rich resource on formation, granted many factors influence it today, consequent on the signs of the modern age. This demands that new approaches and perspectives are evolved to make the priest of today as relevant as ever.

This book, therefore, reflects on some of these issues and perspectives to formation in the modern age. The challenges of the modern age to formation cannot be exhausted in one volume, however, care has been taken to look at some areas of critical importance in our social context. Also, contributors to the issues are scholars who have made research in those areas of allocation or they pertain to their area of expertise. The contributions are generally analytic and prescriptive in approach and the subscription of individual authors on certain issues are not necessarily a reflection of the collective view of other contributors of this volume. The idea is to evolve a systematic approach to the issues rather than viewing them from a stereotypical lens. The goal is to see the issues from a wider perspective and therefore evolve viable ways to provide answers to current intriguing questions. This volume, therefore, promises to be both contemporaneous and also a propitious literature on formation in our modern age. It is believed that the Silver Jubilarian who has contributed immensely to knowledge in different ways, particularly to formation, would find this book a memorabilia in his honour in making contributions to knowledge particularly in the area of formation. It also would serve as a Launchpad to mirror the years ahead on issues of formation as well as assist pastoral agents in charge of formation with rich materials to peruse.